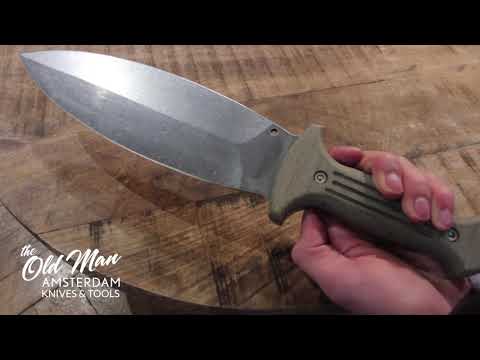 Since the demand for the revised Smatchet 2.0 has far exceeded the supply, we would like to give all fans the opportunity to get a copy of the series version, the Smatchet 2.1. Also made of N690, the Smatchet 2.1 is a true classic as a tactical machete and a large hacking knife that represents a permanent element of the history shared by Col. Rex Applegate and Boker. The handle scales are made from CNC-milled outdoor-compatible green canvas mircata and ensures secure handling. Stonewash finish blade. Shipped with premium and functional cordura sheath.

Colonel Rex Applegate is well known in the knife world. Perhaps best known for the Applegate-Fairbairn combat dagger. The dagger has become an absolute icon in the industry and is instantly recognizable among military historians and knife collectors alike. Colonel Applegate trained Allied Special Forces in combat and founded the School for Spies and Assassins. At one point, he even became President Roosevelt’s personal guard.

Another recognizable design is the Smatchet! Originally a design by William Fairbairn, with whom Applegate designed the dagger during World War II. A strange mixture of dagger and machete, it was originally designed as a large combat knife, measuring at a whopping 42cm in length. The Smatchet has become a collector’s item and outdoor tool. Many people around the globe like to pay homage to the Smatchets legacy while building a campfire. Just as some people go camping with a Khukuri.

All products are sent from our store in Amsterdam within 24 hours (working days). Delivery time for The Neterlands and Belgium: 1-3 days. Internationally, within EU: 1 week Internationally, outside EU: 2 weeks.

Returning an item in our store is free, by mail the return costs are not covered by us. We offer a 14 day term to return items, after you have received the order.

Do you have a question?Ask an expert

Your cart is currently empty

is added to your shopping cart.